With Christmas festivities over and the New Year upon us, has the UK economy delivered some early good news? Wages are rising at their highest rate for nearly a decade, so is it time to celebrate?

A silver lining for the economy?

It’s clear the UK is sailing into uncertain waters. The economy is showing signs of slowing as it approaches the jagged rocks of Brexit, the high-street appears to be sinking, and there is a rising tide of in-work poverty. So, the news of wage growth over the last three months to October arrives as a much-needed silver-lining story.
These good tidings appear in the latest labour report published by the Office of National Statistics (ONS) “Labour market economic commentary: December 2018”. A regular, independent economic analysis of the UK labour market, including employment and wages.

The good news is that the regular average weekly earnings, excluding bonuses, is up 3.3% on the year to £495 in October 2018. This is the fastest rise pace since November 2008. Of course, this is offset slightly by inflation, but in real terms the average weekly wage is still at its highest since 2011.
“Real earnings are now growing faster than at any time since around the end of 2016,” said the ONS senior statistician Matt Hughes. 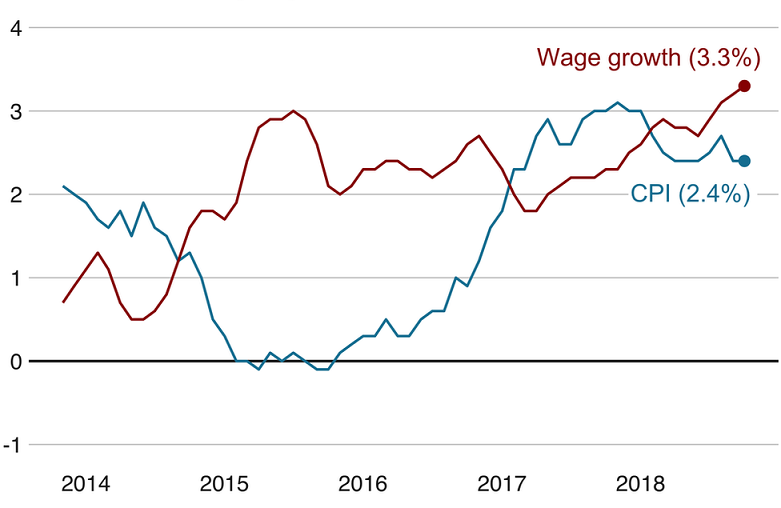 Employment and unemployment figures up

Employment has increased by 79,000 on the quarter to a record high of 32.48 million in the three months to October 2018. The highest figure since records began in 1971.

Unemployment has also increased, by 20,000 to 1.38 million, although it is still lower than a year ago. This follows a difficult year for retailers with many high street workers made redundant, often in areas with already high levels of deprivation. [ONS]

So, a healthy-looking economy?

Well, several economists warned that the cross-currents of rising employment and unemployment made the labour market difficult to read. But with unemployment figures so low, shouldn’t wages be even higher?

Stephen Clarke, senior economic analyst at the Resolution Foundation think tank, points out: “While wages are currently growing at their fastest rate in a decade and employment is at a record high, the sobering big picture is that inflation-adjusted pay is still almost £5,000 a year lower than when Lehman Brothers was still around”.

However, the analysts Capital Economics are more optimistic: “The latest labour market figures suggest that a recovery in real pay growth is taking root. This supports our view that GDP growth will rebound next year if a ‘no-deal’ Brexit is avoided. Admittedly, there have been false dawns in the past few years. But we think that the recent recovery in real earnings growth will probably be sustained.”

Brexit uncertainty cannot be ignored. There are worries that firms may start laying off staff as they put in place contingency measures. Also, recent slowdowns in manufacturing and construction are expected to lead to lower levels of employment and wages in the New Year.

In the short term, while the rise in wages and employment may suggest the economy is moving in the right direction these may indeed be just a silver lining. There is still much to do to improve UK wages and employment prospects long-term, especially for those on lower incomes.