The number of people living in poverty, here in the UK, is on the rise. These include an estimated 4 million workers and over 4 million children living below the poverty line.
The expectation is that things are only going to get worse. Is there any way of reversing the tide?

What exactly defines poverty has been something of a debate in recent years. As a result a number of organisations have conducted extensive research, using wider ranges of metrics, to produce more accurate numbers. The Social Metrics Commission Briefing, Autumn Budget 2018 (October 2018) finds that there are now 14.2 million people living in poverty in the UK.

These figures were backed up by The Joseph Rowntree Foundation (JRF) whose most recent Report on UK Poverty 2018 provides similar striking statistics:

The reality of living in poverty

For the first time in the last 20 years, poverty rates have risen for every type of working family (lone-parent, couple families, families with full and part-time workers or a different number of working adults).

The figures also show that lone-parent families have been hit the hardest, with nearly 50% living now in poverty. As lone parents are more likely to be in low paid jobs, they are also exposed to high housing costs and cuts to benefits and tax credits.

Perhaps the most alarming statistic of all is that there are now 4.1 million children living in poverty. That’s a rise of 500,000 in five years. Due in no small part to the huge surge in working parents being unable to make ends meet. A large and growing body of research shows that growing up in poverty can affect children’s physical and psychological development and mental well-being but also can sabotage their future life options. 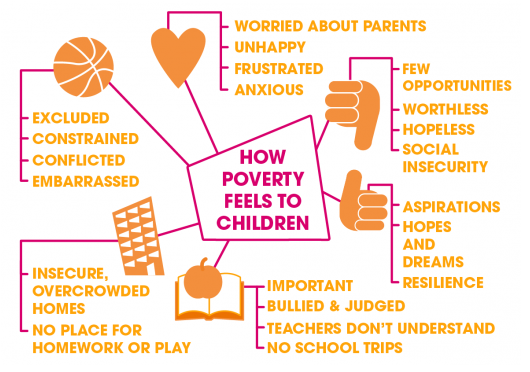 Why is child poverty on the rise in the UK?

While there are many reasons why individual families can fall into poverty, the sheer numbers suggest that problems do exist at an economy level.

The combination of all three creating a perfect storm that traps families who fall into poverty.

Can we halt the rise of poverty?

Every day people are finding they own ways to loosen grips of poverty, making the impossible choice of feeding the children or heating their homes. But the fact is that we all share a responsibility to eradicate poverty in this country, both as neighbours, employers, families, investors or landlords.

Research and experience both point to three main things that could be done to loosen poverty’s grip:
● reduce housing costs for renters
● strengthen the support offered by the social security system
● open up opportunities for better-paid employment.

Chief executive of the JRF, Campbell Robb, said: “We are seeing a rising tide of child poverty as more parents are unable to make ends meet, despite working.

“This is unacceptable. It means more families are trapped in impossible situations, struggling to pay the bills, put food on the table and dealing with the terrible stresses and strains poverty places on family life.”

“We have an opportunity to fix this and ensure everyone can reach a decent standard of living – it is one we must seize to make the country work for everyone after Brexit.”